The US Women’s National Soccer Team filed a motion to appeal their dismissal from the original lawsuit against the United States Soccer Federation in June. The federation, who is one of world soccer’s most important entities and among its largest employers, has claimed that it does not discriminate based on gender or pay players differently for being women as compared to men.

The “uswnt lawsuit appeal” is a final plea made by the USWNT in their lawsuit against the U.S. Soccer Federation. The team claims that they were paid less than their male counterparts, and the dismissal of their case was “flatly wrong.” 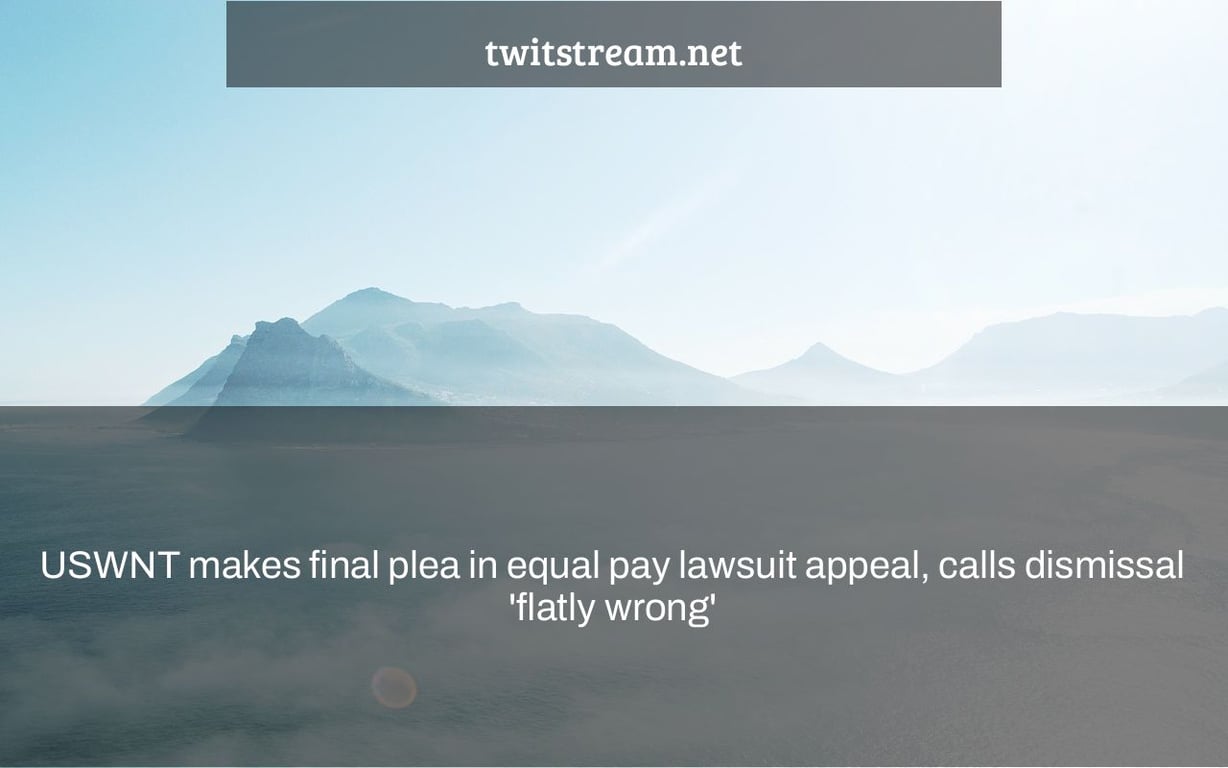 The USWNT’s main argument remained the same: that women were underpaid in comparison to their male counterparts. However, the USWNT’s attorneys have underlined recent occurrences, notably a judgement in a comparable court case, to support their appeal in this round. The deadline for written submissions was Friday, and the appeal will now go to oral arguments.

In May 2020, the USWNT’s equal pay complaint was rejected after the court agreed with US Soccer’s contention that the women were paid more in total compensation than their male colleagues. The USWNT’s attorneys contended in their July appeal that this was only true because the women outperformed the men, despite the fact that the women’s performance incentives were still lower.

The USWNT now claims that an appeal granted earlier this month in another case indicates why the judge was incorrect to reject their lawsuit in the first place in their last brief filed Friday in the 9th Circuit Court of Appeals.

Tracy Sempowich, a woman, filed for wage discrimination in that case because, although receiving the same commission rate as her male coworkers, her base salary was lower. Her complaint was rejected by a judge due to her larger overall remuneration than her coworkers, but it was overruled by an appeals court. The court found that she was paid more because she earned more sales, but the rate was lower, and “an employer violates the Equal Pay Act if it pays female workers at a rate less than that of similarly situated male employees,” according to the court.

According to the legal team for the USWNT, this demonstrates that comparing total pay between the USWNT and the USMNT is inadequate to assess if discrimination occurred. The USWNT brief claims that “every court of appeals that has addressed a total-compensation approach to the Equal Pay Act has rejected it.”

The USWNT brief goes on to say: “The district court utterly overlooked the fact that the players’ remuneration is contingent on their performance because it used a total-compensation criterion. The only option for women to earn the same total compensation as men was to perform much better. That isn’t fair compensation for the same amount of effort.”

Anticipating that the USWNT would bring up the Sempowich case, U.S. Soccer sent a letter to the 4th Circuit last week saying that it doesn’t apply to this case since the 4th Circuit was not asked to consider remuneration arrangements similar to those used by the US national teams. Aside from bonuses, males are paid per-camp, whilst women are compensated on a hybrid system in which certain players are paid based on call-ups while others are awarded wages.

“The Fourth Circuit did not [and had no need to] evaluate extremely complicated, negotiated compensation packages of the kind at issue here, i.e., where no one salary component differentiates between men and women while everything else stays the same,” U.S. Soccer said in a letter to the court on Thursday.

The brief goes on to say, “That made-up rule is improper.” “When there are some variations in compensation systems, a court does not just throw up its hands and refuse to compare rates.”

The attorneys representing the USWNT say that just because women bargained for a different pay structure than males does not indicate they preferred the pay structure they obtained. According to the brief, the women requested equal pay, but U.S. Soccer refused.

The USWNT brief also references previous occurrences to argue that U.S. Soccer cannot claim that “equal World Cup bonuses are difficult to give.” That’s because U.S. Soccer has said it intends to equalize prize money in the future, and it just announced a joint meeting between the federation and both national teams to discuss it last week. Cindy Parlow Cone, the president of US Soccer, wrote to the clubs in September, urging them to discuss a common plan “that equalizes World Cup prize money between the USMNT and USWNT.”

According to the USWNT’s brief, US Soccer is attempting to “make this matter seem as convoluted as possible” rather than offering legal reason for why the judge’s first decision was correct. The USWNT brief states, “The federation wants to speak about everything other than the district court’s ruling.”

Lindsey Horan discusses the USWNT’s response to claims of abuse leveled against Rory Dames, the former coach of the Chicago Red Stars.

R. Gary Klausner, the judge who heard the first complaint, rejected the USWNT’s claims, citing U.S. Soccer’s study, which revealed that the USMNT was paid $212,639 per game and the USWNT was paid $220,747 over the time period covered by the action. The USWNT, on the other hand, disputed that rationale on Friday, calling it “happenstance” that women earned somewhat more per game than males.

The USWNT short adds, “That only occurred because the women won an unprecedented amount of games, including back-to-back World Cups.” “In reality, the women had received less total pay per game than the males for the class period when they brought the complaint in this action. The women then won the World Cup while the case was ongoing, putting their average per-game salary above that of the men.”

The lawsuit is set to go forward with oral arguments, which may begin as early as March, according to the court.

The “uswnt lawsuit 2020” is a lawsuit that the United States Women’s National team has filed against the U.S. Soccer Federation and Major League Soccer in order to fight for equal pay. The case was dismissed by a judge in January of 2019, but the USWNT is now appealing this decision.

Formula 1: Where next for sport after Verstappen and Hamilton title drama?