The Pokemon TCG Online is a wonderful card game that has been around for over 20 years. The difference between the old and new games is that there are now 5 expansions instead of just one, making each pack an adventure in itself! Let’s find out what these packs have to offer!.

Shadow Rider Calyrex VMAX Expanded is a card from the Pokemon TCG Online. It has a price of $49.99 USD and it is considered to be rare. 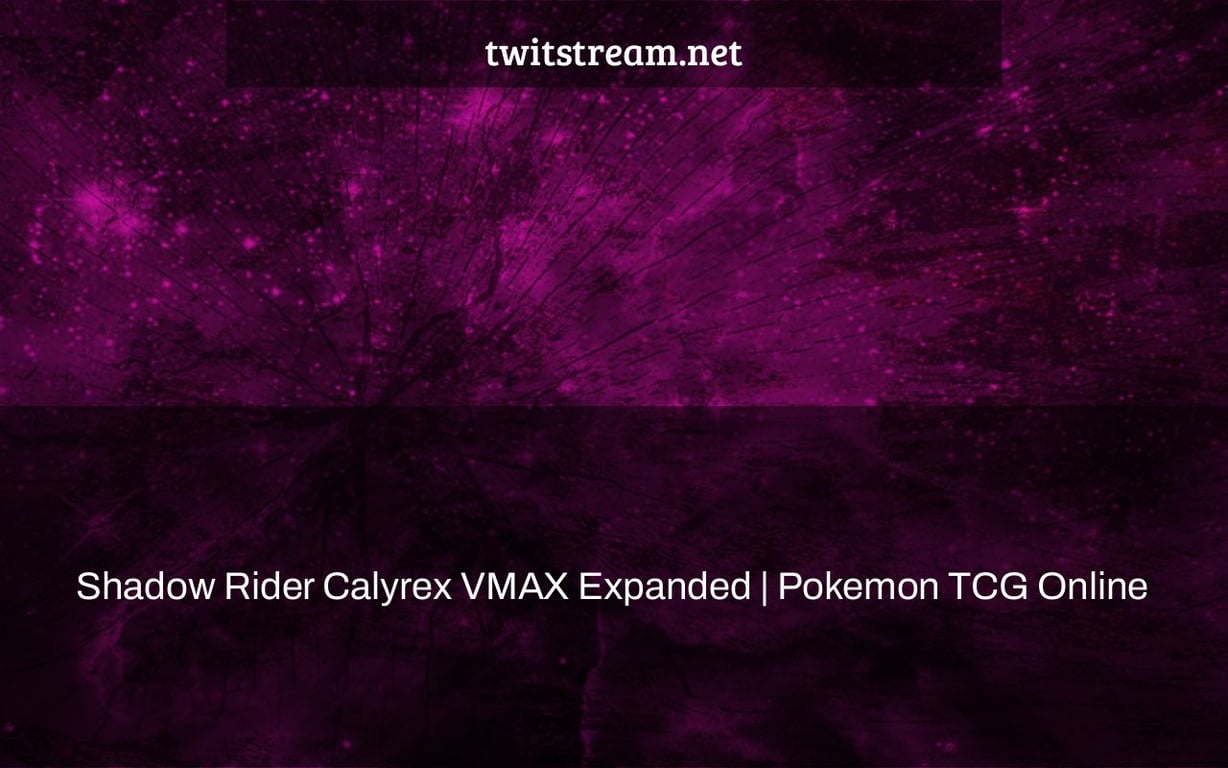 Shadow Rider Calyrex VMAX is one of the greatest Expanded decks in Pokemon TCG Online, thanks to one of the finest cards from Chilling Reign. Shadow Rider Calyrex VMAX benefits from the additional cards in Expanded, the format where you may potentially pile on more than two Energy during your first turn, since it causes more damage based on the quantity of Energy you have in play. A number of cards, such as Max Elixir, give insane Energy acceleration to your Pokemon, but they’ve been rotated out of Standard. When you upgrade a deck from Standard to Expanded, it moves from S-tier to God-tier, which is a typical illustration of the Expanded upgrade.

I’ll walk you through the Expanded version of the Shadow Rider Calyrex VMAX deck, which uses the greatest Expanded Trainer cards and Pokemon to obtain easy OHKOs.

There are a total of 58 cards in the deck.

Isn’t the improvement from Standard significant? You also get additions like Gengar & Mimikyu-GX and the king of Expanded, Tapu Lele-GX, in addition to completely missing Crobat V. You also have a number of Item cards that weren’t in the Standard lists, allowing you to set up quicker, obtain more Energy on your Pokemon in fewer rounds, and perform high-damage attacks sooner. Most Expanded decks benefit from N, Acerola, Sycamore (or Research), Guzma, Float Stone, and Computer Search, and this one is no exception. You can get another Ace Spec or an additional N/Sycamore if you don’t have Computer Search. If you’re not playing competitive matches, the Field Blower and Ordinary Rod may be changed, and the Stadium card can be replaced with Path to the Peak if it’s getting in the way.

Calyrex’s Dark-type Weakness: What to Do

One change I’ve seen folks make to this deck is to shield your Shadow Rider Calyrex VMAX against Eternatus VMAX by utilizing 13 Psychic Energy + 1 Weakness Guard (or 12+2) Energy. Shadow Rider Calyrex VMAX has a Dark-Type vulnerability, and Eternatus is a top Expanded deck that offers a severe danger to this deck. If you have the Energy, I would strongly recommend making that replacement depending on how often you see Eternatus. While it isn’t a Psychic-type Energy and therefore doesn’t match in with the deck’s concept, Shadow Rider Calyrex VMAX does contain Colorless Energy in its attack, thus you’ll only lose 30 damage. This is preferable than having to cope with Eternatus’s 2x damage bonus as a result of your vulnerability.

What is the Shadow Rider Calyrex VMAX and how does it work?

The primary attack of Shadow Rider Calyrex VMAX is Max Geist, which does greater damage based on how much Psychic Energy you have. The success of this attack, as well as obtaining additional Energy onto your Pokemon as quickly as possible, is critical to the deck’s success.

Max Geist gets a 10 out of 10. For each Psychic Energy linked to all of your Pokémon, this attack does an additional 30 damage.

You don’t have to worry about discarding Energy in this deck since Alcremie VMAX isn’t in it. Fog Crystal is an item card that may be used to acquire Psychic Pokemon or Energy in all Psychic decks.

Underworld Door is a skill that allows you to enter the underworld. You may attach a Psychic Energy card from your hand to 1 of your Benched Psychic Pokémon once during your turn. Draw two cards if you linked Energy to a Pokémon this way.

You don’t need the Crobat V in this deck since you’ll be drawing two cards after attaching Energy. We have Tapu Lele-GX and Gengar & Mimikyu-GX instead.

Because of its ability to fetch any Supporter card you desire when you set it on your Bench, Tapu Lele-GX is a must-have for any Expanded deck. However, you may really employ the assault of this deck:

20 watts of energy drive This move inflicts 20 damage multiplied by the amount of Energy held by both Active Pokémon. Weakness and Resistance have no effect on this damage.

Its GX attack may also be used to heal two of your benched Pokemon.

Your secondary attacker is Gengar & Mimikyu-GX, which attack does damage according on the amount of Trainer cards in your opponent’s hand.

Poltergeist is a 50-minute film about a poltergeist. Your opponent shows their hand to you. For each Trainer card you locate there, this attack does 50 damage.

This assault is particularly effective in Expanded, because every deck has a large number of Trainer cards. Furthermore, Gengar & Mimikyu-GX have a fantastic GX attack:

GX Horror House During your opponent’s next turn, they can’t play any cards from their hand. Each player draws cards until they have 7 cards in their hand if this Pokémon has at least 1 additional Psychic Energy tied to it (in addition to the cost of this attack).

This is wonderful for delaying early on, but unless you absolutely need it, I wouldn’t bother with the conditional card-drawing effect. You should save your Psychic Energy cards for your Shadow Rider Calyrex VMAX.

Trainer cards that are important

The Trainer cards are the deck’s strongest asset. The main one here is Max Elixir, which is a complete game-changer:

Look through your deck’s top six cards and attach a basic Energy card to a Basic Pokémon on your Bench. Reshuffle the remaining cards into your deck.

To get as much Psychic Energy onto your Pokemon as possible, this deck has four copies of Max Elixir.

If you don’t want to go for the Calyrex, Mysterious Energy may work as a connection to Tapu Lele-GX, and then the Supporter card you obtain via Lele’s ability. After you’ve set up your board, you may utilize Silent Lab to disable a number of meta cards that depend on abilities to advance their decks, such as Crobat V, Dedenne-GX, and Darkrai-GX. While this may damage your Tapu Lele-GX, as a Stage 1 Pokemon, it will not effect your Shadow Rider Calyrex VMAX.

Shadow Rider Calyrex VMAX is a good deck in Pokemon TCG Online for both Standard and Expanded formats, and Expanded cards like Max Elixir only improve it. If you’re wanting to convert your Expanded deck to Standard, we offer recommendations for two different deck lists: the Turbo and Zacian V variants, as well as the Alcremie VMAX version. Eternatus VMAX and Umbreon VMAX decks, both of which are currently prevalent in the meta, are its biggest weaknesses.

The “shadow rider calyrex vmax card” is a Pokemon TCG Online card. It can be used in the deck of Shadow Rider Calyrex VMAX Expanded.

How much money is a Ice Rider Calyrex Vmax worth?

How do I get shadow rider in Calyrex?

A: Please, ask the games developer.

How much money is Shadow Rider Calyrex?

How to Troubleshoot “AppModel Runtime Error 0x490” in Windows PC